A few of our top pavement services are:

Newark, New Jersey is the largest city in Essex County, as well as the state of New Jersey in regard to population. With approximately 281,764 people residing in Newark, it has become one of the United States most prominent shipping, air, and rail hubs. Although Newark is located in New Jersey, it is located only 8 miles west of lower Manhattan, and is the 2nd largest city within the New York metro area.

The city was settled in 1666 by Puritan settlers of the New Haven Colony, and is regarded as one of the oldest European cities in the country. It is believed that the name for the city came from Newark-on-trent, England where Abraham Pierson, the original pastor, was ministered.

Newark has many attractions such as the Branch Brook Park. The park is the recognized as the oldest county park in the country, and is the home of our nation’s biggest cherry blossom tree colony. With over 5,000 trees, the park is a spectacle during flowering season for the trees and has become an important tourist attraction for the city of Newark, and the state of New Jersey.

There are also a number of educational and cultural locations in the city of Newark. Rutgers University, Seton Hall University, and the New Jersey Institute of Technology (NJIT) are located in the city, creating a prominent higher education population. As well as these Universities, Newark is also home to the Prudential Center which entertains NHL fans for New Jersey Devil home games, as well as sporting events for the local universities.

For tenants of the arts, the New Jersey Performing Arts Center and the Newark Symphony Hall are both located within the city. The performing arts center is known as one of the largest performing arts facilities in the United States, and has seen over 9 million visitors since it’s doors opened in October of 1997.

Check out a Recent Newark Project 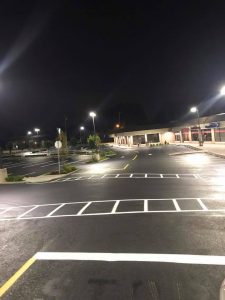 Last week we received a request for a quote for a new parking lot that was to be put in a few miles away. After examining the request, we recognized the location of the job and were able to picture what was entailed. We followed up with the client and were able to meet with him at the job site, the next day. Our client explained to us that the entire location was in need of parking lot paving. It was a project that would require a first-class paving contractor.   After providing a quick, and free estimate, our client decided that he was ready to move forward with the project. For a job that size, we would need time to prepare. We scheduled the parking lot paving to begin the following week.   The next week our team returned to the job site to begin the asphalt paving process. Before beginning, we met with the customer again, and reviewed the details and schedule of the job, and set to begin. We had our work cut out for us as the parking lot had numerous potholes and severe alligator cracking.   After a few days, we were putting the finishing touches on the parking lot. We spoke with the customer at the summation of the project. We explained to him that regular parking lot maintenance was important and that we could provide services such as pothole patching and crack sealing. Happy with the excellent work we had performed, he told us that he would contact us for any asphalt repair needs he might have. After a handshake, our crew was back on it’s way to the office.
Categories : Newark

See what our customers say about us

I was amazed at how quickly they fixed my sidewalk.
Albert G.
I was pretty worried about the state of my company’s pavement, so I gave them a call. I am so happy that I did! My…
Ellen B.
The day I used their services was the day of a pretty bad snowstorm. My driveway was covered in snow – lots of it. I…
Jack L.

When it comes to attracting customers, appearances count. It’s a main rule of marketing, but it’s one that is often ignored – especially when it comes to the exterior of your business. Believe it or not, your potential customers notice little details that you might not even consider when they walk past your company’s building. They notice the landscaping, the signs, and yes, the pavement as well.